Mudra Yoga Teacher Training - Download version What does Mudra mean? A mudra is a symbolic,...

What does Mudra mean? A mudra is a symbolic, ritualistic gesture used in yoga, Buddhism and... 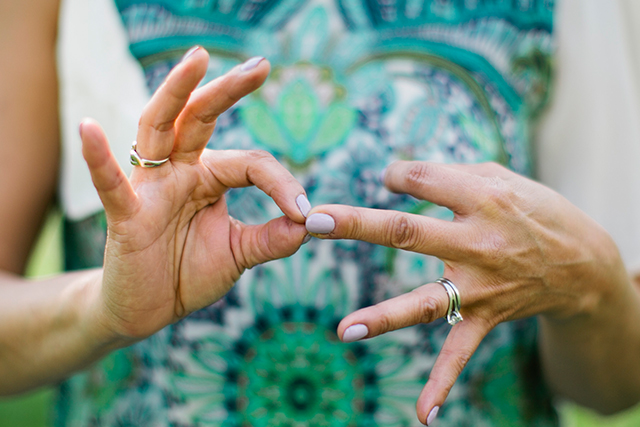 What does Mudra mean?

A mudra is a symbolic, ritualistic gesture used in yoga, Buddhism and Hinduism. The word is Sanskrit meaning "gesture," "mark" or "seal." Mudras are most commonly known as hand positions in yoga and meditation, which are believed to affect the flow of energy in the body and unblock chakras.

There are numerous types of mudras. Each type is thought to have a specific effect on the body and mind by clearing the psychic centers and energy channels. Although hand mudras are the most common in yoga, there are also head, postural, lock and perineal mudras.

Of the many types of hand mudras, some are as follows:

Rāmabhadrācārya meditating on the banks of the Mandakini River with fingers folded in the chin mudrā.The thumb and forefinger on each of the hands are joined, forming a zero. The rest of the fingers are extended.The hands are placed palms-up on the thighs or knees while sitting in vajrasana.

This mudrā supposedly activates the diaphragm, making for deep "stomach-breathing" as the diaphragm pushes out the internal organs when it descends towards the pelvis on inhalation. Slow breathing in a 5-2-4-2 mentally counted rhythm (counting to 5 during the exhalation, to 2 while holding the breath, and to 4 on the inhalation) causes prana flow in the pelvis and in the legs.

The thumb and forefinger are the same as in Chin Mudrā. The rest of the fingers are folded into a fist.The non-folded part of the forefinger and the middle finger should still be touching. As in Chin Mudrā, the hands are placed palms-up on the thighs while sitting in Vajrasana. This mudra supposedly activates the ribs, making them expand sideways on inhalation. Slow breathing in a 5-2-4-2 counted rhythm (counting to 5 during the exhalation, to 2 while holding the breath, and to 4 on the inhalation) causes prana flow in the torso and in the throat.

The thumb is folded into the palm, touching the base of the small finger. The rest of the fingers are folded over the thumb, to create a fist. The hands are placed palms down on the thighs while sitting in Vajrasana. This mudra supposedly activates the pectoral muscles, making the chest expand forward on inhalation. Slow breathing in a 5-2-4-2 counted rhythm (counting to 5 during the exhalation, to 2 while holding the breath, and to 4 on the inhalation) makes prana flow in the throat and in the head.

The hands are as in Adi Mudrā, but the palms face upwards and are located at the level of the navel, with the left and right knuckles and first finger joints touching. This is done while sitting in Vajrasana. Breathing becomes full: in inhalation, the diaphragm descends, the ribs then expand, and then the pectoral muscles move forward. Exhalation works in the same order, which creates a "wave" or ripple effect.

A complicated mudra combining hand gestures, synchronized movement from gesture to gesture within the breath cycle, and meditation. The mudrā is practiced sitting in Siddhasana. Even a single breath cycle of this mudra can significantly stimulate the body. It is described in the book, Theories of the Chakras, by Hiroshi Motoyama.

Korea's National Treasure 119. The right hand shows abhaya mudra while the left is in the varada mudra.

The Abhayamudra "gesture of fearlessness" represents protection, peace, benevolence and the dispelling of fear. In Theravada Buddhism it is usually made while standing with the right arm bent and raised to shoulder height,  the palm facing forward, the fingers closed, pointing upright and the left hand resting by the side. In Thailand and Laos, this mudra is associated with the walking Buddha, often shown having both hands making a double abhaya mudra that is uniform.

This mudra was probably used before the onset of Buddhism as a symbol of good intentions proposing friendship when approaching strangers. In Gandharan art, it is seen when showing the action of preaching. It was also used in China during the Wei and Sui eras of the 4th and 7th centuries.

This gesture was used by the Buddha when attacked by an elephant, subduing it as shown in several frescoes and scripts. In Mahayana Buddhism, the northern schools' deities often paired it with another mudra using the other hand.

The Bodhyangi mudrā, the "mudrā of the six elements," or the "fist of wisdom," is a gesture entailing the left-hand index finger being grasped with the right hand. It is commonly seen on statues of the Vairocana Buddha.

The Buddha preached his first sermon after his Enlightenment in Deer Park in Sarnath. The dharmachakra or "turning of the wheel" mudrā represents that moment. In general, only Gautama Buddha is shown making this mudrā except Maitreya as the dispenser of the Law. Dharmacakra mudrā is two hands close together in front of the chest in vitarka with the right palm forward and the left palm upward, sometimes facing the chest. There are several variants such as in the Ajanta Caves frescoes, where the two hands are separated and the fingers do not touch. In the Indo-Greek style of Gandhara, the clenched fist of the right hand seemingly overlies the fingers joined to the thumb on the left hand. In pictorials of Hōryū-ji in Japan the right hand is superimposed on the left. Certain figures of Amitābha, Japan are seen using this mudra before the 9th century.

The Dhyāna mudrā ("meditation mudra") is the gesture of meditation, of the concentration of the Good Law and the saṅgha. The two hands are placed on the lap, right hand on left with fingers fully stretched (four fingers resting on each other and the thumbs facing upwards towards one another diagonally), palms facing upwards; in this manner, the hands and fingers form the shape of a triangle, which is symbolic of the spiritual fire or the Triratna (the three jewels). This mudra is used in representations of the Śākyamuni Buddha and Amitābha Buddha. Sometimes the Dhyāna mudrā is used in certain representations of Bhaiṣajyaguru as the Medicine Buddha, with a medicine bowl placed on the hands. It originated in India most likely in the Gandhāra and in China during the Wei period. This mudra was used long before the Buddha as yogis have used it during their concentration, healing, and meditation exercises.

It is heavily used in Southeast Asia in Theravāda Buddhism; however, the thumbs are placed against the palms. (Dhyāna mudrā is also known as Samādhi mudrā or Yoga mudrā; Japanese: Jō-in, Jōkai Jō-in; Chinese: Ding Yin.)

Hands of Amitābha statue at Kōtoku-in in Kamakura, demonstrating mida no jōin

The mida no jōin (弥陀定印) is the Japanese name of a variation on the mudra, where the index fingers are brought together with the thumbs. This was predominately used in Japan in an effort to distinguish Amitābha (hence "mida" from Amida) from the Vairocana Buddha, and was rarely used elsewhere.

The Varadamudrā "generosity gesture" signifies offering, welcome, charity, giving, compassion and sincerity. It is nearly always shown made with the left hand by a revered figure devoted to human salvation from greed, anger and delusion. It can be made with the arm crooked and the palm offered slightly turned up or in the case of the arm facing down the palm presented with the fingers upright or slightly bent. The Varada mudrā is rarely seen without another mudra used by the right hand, typically abhaya mudrā. It is often confused with vitarka mudrā, which it closely resembles. In China and Japan during the Northern Wei and Asuka periods, respectively, the fingers are stiff and then gradually begin to loosen as it developed over time, eventually leading to the Tang dynasty standard where the fingers are naturally curved.

In India, varada mudra is used in images of Avalokiteśvara from the Gupta Empire (4th and 5th centuries). Varada mudrā is extensively used in the statues of Southeast Asia.

The Vajra mudrā "thunder gesture" is the gesture of knowledge. An example of the application of the Vajra mudrā is the seventh technique (out of nine) of the Nine Syllable Seals.

The Vitarka mudrā "mudra of discussion" is the gesture of discussion and transmission of Buddhist teaching. It is done by joining the tips of the thumb and the index together, and keeping the other fingers straight very much like the abhaya and varada mudrās but with the thumbs touching the index fingers. This mudra has a great number of variants in Mahayana Buddhism. In Tibetan Buddhism, it is the mystic gesture of Tārās and bodhisattvas with some differences by the deities in Yab-Yum. Vitarka mudrā is also known as Prajñāliṅganabhinaya and Vyākhyāna mudrā ("mudra of explanation").

The Jñāna mudrā ("mudra of wisdom") is done by touching the tips of the thumb and the index together, forming a circle, and the hand is held with the palm inward toward the heart.

Joseon Dynasty figure on the left makes the Karana mudrā.

The Karana mudrā is the mudra which expels demons and removes obstacles such as sickness or negative thoughts. It is made by raising the index and the little finger, and folding the other fingers. It is nearly the same as the gesture known as corna in many 'western' countries, the difference is that in the Karana mudra the thumb does not hold down the middle and ring finger. (This mudra is also known as Tarjanī mudrā; Japanese: Funnu-in, Fudō-in).

Muromoto (2003) in discussing his experience of mudra in relation to his martial arts training makes reference to Mikkyō, Tendai and Shingon Buddhism.